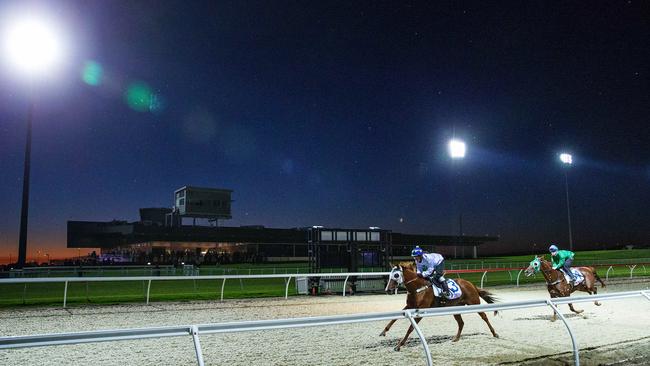 The Punter’s Prince has founds all the best bets with his best of the night coming up in the last event.

Since being acquired by a new trainer, Gavin Bedggood has been building this three-year-old gelding to what has so far been an elusive maiden victory.

He got back in a very slowly run race when second-up off a spell and sprinted hard to finish third.

His mid-race and late sectionals rated nicely for a horse who will be better-suited third-up.

This smaller field should see him settle closer to the barrier, and he will be fitter than he has been so far in this preparation.

Allande produced a great resuming effort at Donald over 1350 metres.

It was a maiden race which rated nearly six lengths above the benchmark and she showed good fast and mid-race speed.

She was clearly going to take plenty of fitness from having had the run, but it will have shaped up perfectly for this 1400-metre race.

She peaked on her run when first-up and her speed tapered out late.

Blinkers go on and she will race on the speed again.

Mungo Jerry is ready to fire at his second race start.

The Chris Hyland-trained two-year-old sprinter raced over 1100 metres on debut behind the likes of The Hass and Precious Socks.

It was a race dominated by the leaders, and he made good ground from the back without being urged out of the barriers.

There did not seem to be a lot of intent on debut, and with the winkers going on here, plus the rise in the distance, we expect a much better performance.

With natural fitness benefits to come, he will be hard in the finish and should be winning this.

The synthetic-track specialist Heljami comes back to the races after a little freshening up and jumps out in between races.

She raced at Cranbourne over 2025 metres in BM-70 grade but was found wanting in a small field.

Her jump out since then was on the synthetic over 1000 metres, and it was the perfect tick-over run for this BM-64 event over the mile.

She only has to go up 1kg for a drop down in grade after the claim from Sheridan Clarke.

Her numbers read seven starts on the synthetic for four wins.