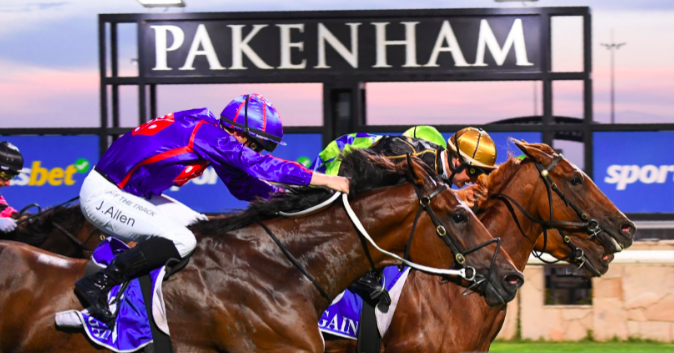 The best bets from BetDeluxe ahead of Thursday-night racing at Pakenham.

The best of the night comes up in race three with plenty of value scattered throughout the eight-race card.

Going with the track and distance form in this race.

Denied bring in a good 1200-metre Pakenham debut run where she flashed home to finish second behind Hell Hath No Fury.

The race was not run to suit her at all as she got out the back of what ended up being a crawl and sprint to the finish post which favoured the leader and eventual winner.

From a better barrier and a race with a bit more pace in it, she should able to stretch out and get a nice cart into the race.

Will definitely elevate from a fitness perspective and looks the one to beat despite the favourite bringing in Caulfield form.

Suggested Bet: Denied each-way at $5 the win and $2 the place.

Madame Du Gust finds a much easier race than she faced last start.

The three-year-old filly from the Trevor Rodgers stable run four lengths in Group 3 company behind the very smart Argentia only 12 days ago and now drops in grade to BM-58 level.

She was making the rise from 1000 metres to 1200 metres for the first time in her career, so she will have taken great conditioning and fitness for having that run.

Barrier eight might be a little tricky for Zac Spain to navigate, but there is every chance he slots the filly into a midfield position with some cover and saves her for one sprint in the straight.

She is still lightly raced and has the fresh legs, which is a big advantage in these types of fields with older runners who have plenty of convictions.

No Puzzle was far from a disgrace at her first effort in town this preparation when running 10th of 13 runners at Caulfield in BM-78 level.

She will have to contend with a rise in the weights to 58kgs, but this will be offset by one of two things; Mark Zahra and a drop down grade.

This is a huge jockey change with Alana Kelly hopping off and Zahra jumping aboard.

His aggressive riding style should see this mare settle closer in the run than she did last start after being a bit tardy away.

She is fit and it is hard to see her missing a top two finish based on what she has shown this campaign.

Suggested Bet: No Puzzle each-way at $7 the win and $3 the place.

There was good money around for Baglioni at Sandown a fortnight ago, but he just found it all a bit too tough.

He finished fourth of seven runners and with just over four lengths away from the winner Here To Shock.

It is very likely he just lacked the race fitness to run a very strong mile given he was only second-up from a spell.

He remains at BM-64 level, but this race does look to be easier on paper with the opposition being no where near the class of Here To Shock.

Expecting a sharp elevation on what he did at Sandown and we can back him each way.