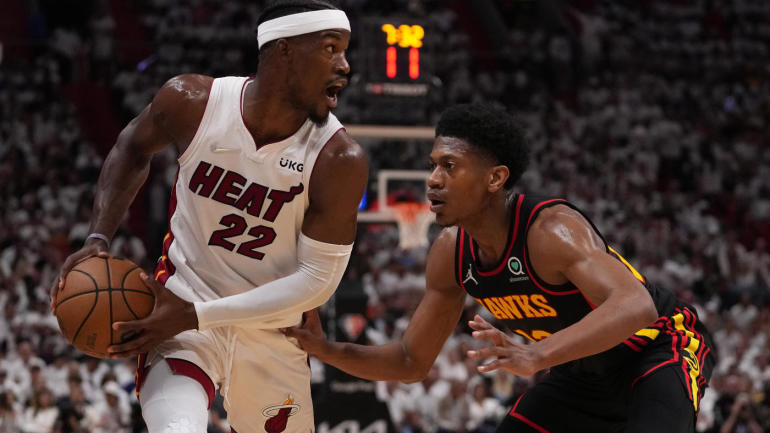 Miami and Atlanta get the proceedings underway on Wednesday.

All the best bets from three huge playoffs games.

Miami can put its playoff series against Atlanta to bed when it hosts the Hawks at FTX Arena on Wednesday.

Jimmy Butler came up trumps again for the Heat with 36 points and 10 rebounds, while Trae Young’s struggles for the Hawks continued as he only managed nine points in the loss.

Miami will be without the services of Kyle Lowry yet again having been ruled out with a hamstring complaint, but his replacement in the form of Gabe Vincent performed admirably with 11 points and four assists in game four.

The Heat’s defence is what impressed most in game four and they held Hawks to just 40% from the field.

Unless Young has a complete form reversal and puts up atomic numbers, the Heat should be moving on to the next round and covering the spread in the process.

The seventh-seeded Minnesota Timberwolves are on the road as they travel to face the second-seeded Memphis Grizzlies in a pivotal Game 5 of their best-of-seven first-round series.

With the added excitement around Ja Morant being crowned as the most improved player in the NBA, the Grizzlies will be keen to lift their marquee guard in a bid to get ahead in what is so far a 2-2 series count.

The winning momentum is currently held by the Timberwolves coming into clash.

Both teams have won on the opposing team’s floor in this series but the fact remains that Memphis rallied from a massive deficit to win Game 3 and nearly won Game 4 on the road despite a huge gap in the free-throw conversions.

The Grizzlies showed their reliance on Morant is not as heavy as it might actually seem, with the star guard not being a massive factor offensively in the last two fixtures.

But a return home and a lift from Morant will be needed if they want to go 3-2 up in the series.

Expect the Grizzlies to find a way to victory here.

In a series that many tipped was going to be a genuine clean sweep in favour of Phoenix, the Pelicans hit the road with this playoff series between them and the Suns tied at 2-2.

Phoenix is desperately sweating on the return of their gun shooting guard Devin Booker who is on the mend from a hamstring injury.

There is still some doubt over his potential return for this game and the limelight on this series has been stolen by Brandon Ingram.

The Pelicans smashed a hapless Suns outfit on Monday with a 118-103 result levelling up the series as Ingram notched up another 30-point match in the post-season.

New Orleans have also found strength on the boards and someone to match DeAndre Ayton in the form of Jonas Valanciunas who has been prolific in this series.

Phoenix gave away far too many free throws and fouls in game four and the Pelicans punished them for it.

If Phoenix are to win this match without Booker, they will need to be far more disciplined.

The market is still expecting the Suns to get it done, even in the likely event that Booker will miss.

However, It is hard to ignore the form of New Orleans right now.