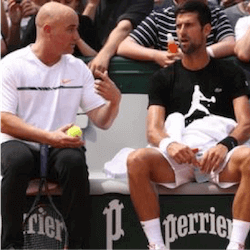 Tennis world No. 1 Novak Djokovic, who has declared himself willing to miss out on future Grand Slams because of his vaccination status, could be permitted to compete in this year’s Italian Open in Rome.

Italy’s cabinet secretary for sports, Valentina Vezzali, announced this week that the Serbian will be welcome to join the action in Rome. Vezzali said since tennis is an outdoor sport, Italy’s tight “green pass” will not be enforced as a requirement on players.

Vezzali, a former Olympic fencer, said the possibility does however exist that Djokovic will not be permitted to stay in a hotel or eat at a restaurant during his time in the country. Vezzali also confirmed that she did not expect any new vaccine mandates coming into place before May, when the tournament is set to take place.

The news of Djokovic being allowed to compete has however sparked an outrage in Italy. Locals have apparently described the announcement as hypocritical, and proof of some being given preferential treatment over “ordinary” people.

According to one social media user, even just going to work in Italy requires a vaccination passport.

Djokovic earlier this week informed an English news broadcaster that he would be happy to miss out on Grand Slam tournaments, and that he had no plans to vaccinate at any point in the future. This had been the first time he had opened up in public about his vaccination status.

He said forfeiting the opportunity to compete in Grand Slams was a price he was willing to pay if that meant the liberty to choose what happens to his body.

Andy Murray Misses Out On Big 700 In Dubai

With the Dubai Championships in full swing in the UAE, former champion Andy Murray will have to hold out a little longer for his 700th career win. Murray recently suffered a straight-sets defeat at the hands of Italy’s Jannik Sinner, while world No. 1 Novak Djokovic reached the quarter finals ….

Djokovic Back In Action In Dubai

World No. 1 Novak Djokovic is officially back in action following his controversy-fuelled deportation from Australia in January. Djokovic on Monday reached the second round of the Dubai Duty Free Tennis Championships when he beat wildcard entry Lorenzo Musetti 6-3, 6-3. The victory marked the Serb’s first match of 2022. ….